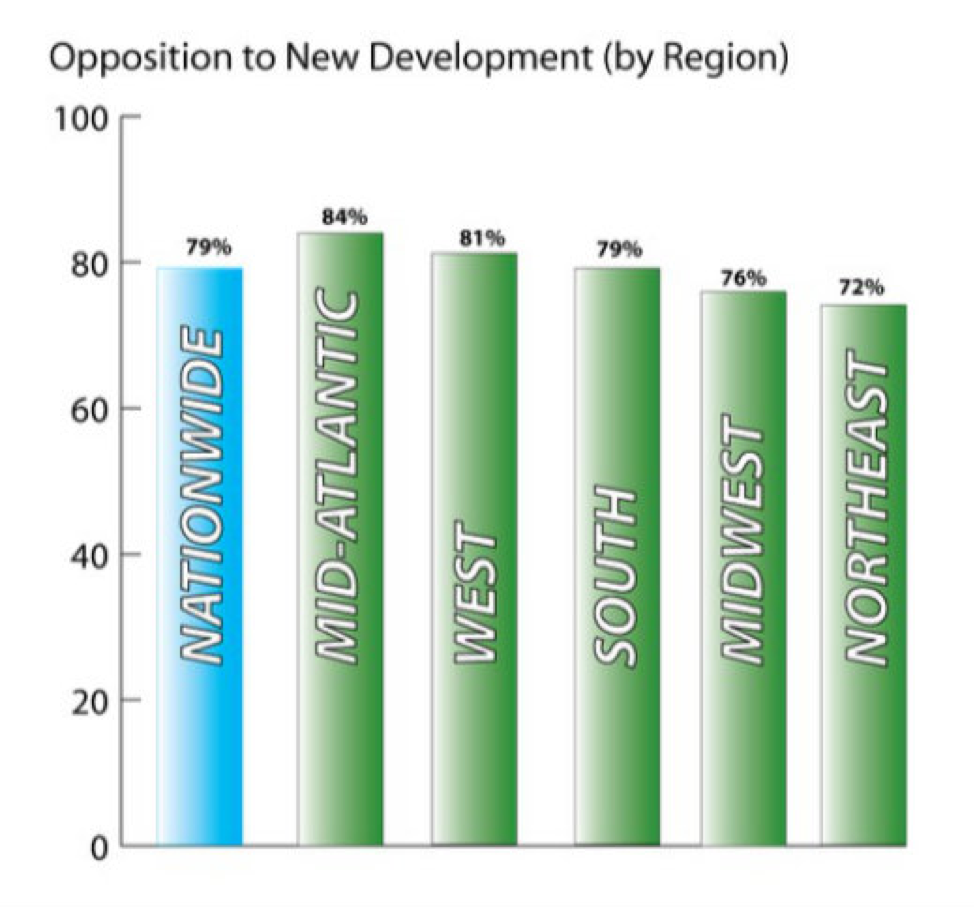 1. Stop all development anywhere near me. 79% of Americans want no new development projects in their communities. Now that does not mean they are against development. They are not. They just do not want it anywhere near them. They want new jobs, local tax dollars and new shopping opportunities, but it should be over there and not right here.

2. All development is political. 84% of American say a candidate’s position on development is important when they decide for whom they will vote, so development takes an increasingly prominent role in local politics.

It is now far easier for a local politician to stand with the passionate, active and angry opponents than to support development. The politics of development now favors opposition. Good projects die every day because they lack political support in the face of active and motivated opposition.

3. The system is broken. 64% of Americans say the relationship between developers and elected officials makes the process unfair. They believe the game is rigged for developers and politicians and it makes them angry and frustrated.

4. Anti-competitive opposition to development is prevalent. 78% believe businesses have a right to actively support or oppose a competitor’s development project, and 62% are not surprised to hear that opposition efforts are actually funded by competitors. It happens far more than you think.

5. Opposition shows up. One out of six Americans have actively opposed a development project in their community. Even when a community has widespread support for a project, the opponents dominate the process because they show up. Opponents are much more motivated than supporters, and that severely warps the approval process in many communities.

6. Traffic is destroying our quality of life. From our experience in projects across three countries, it is the Achilles heel of most projects, and it is the item most likely to scare residents and mobilize opposition. It is very hard to address because no one believes mitigation measures will actually work.

7. Real involvement by the public is discouraged. The system is designed to make constructive input by residents difficult, and public involvement is simply tolerated and looked upon as a check box process. Scheduling of meetings, agendas that make residents sit for hours before speaking and various delays lead the public to believe that their input is not sought or truly welcomed. They are not allowed an active role in the process in many cases.

8. Development approval decisions are bizarre. As far as the public is concerned, there is often no rhyme or reason to what gets built. Things appear in the town center, and the public scratch their heads wondering how anyone could have ever let that thing get built there. They were not paying attention to the lengthy public process that led to its approval or the articles in the local weekly paper following the debate. Now it’s there, and they are seeing additional traffic, and they don’t understand how it could have happened.

9. Jobs and new tax dollars are not enough. It used to be that politicians ran for reelection bragging about the economic development projects they brought home to their districts. They took credit for the new jobs, tax revenue and local investment that came from new development, but that is gone now. It is not enough anymore. Now it is far more politically advantageous to stand with the opponents of development and fight against new projects.

We have seen the landscape for development fundamentally changed over the past 20 years, and it is increasingly difficult to get anything approved.

10. People want to be asked. Do not wait for a public hearing to ask for input. That’s often too late. Involve people in the process early and ask them what they think about various plans before they are complete and up for a vote.

It takes time and a real commitment to public dialogue, but if you take the time to really involve neighbors and local activists, they may just learn to trust you and the process. You will not win them all over, and there will always be intractable opposition, but you can build real understanding and consensus with some effort.