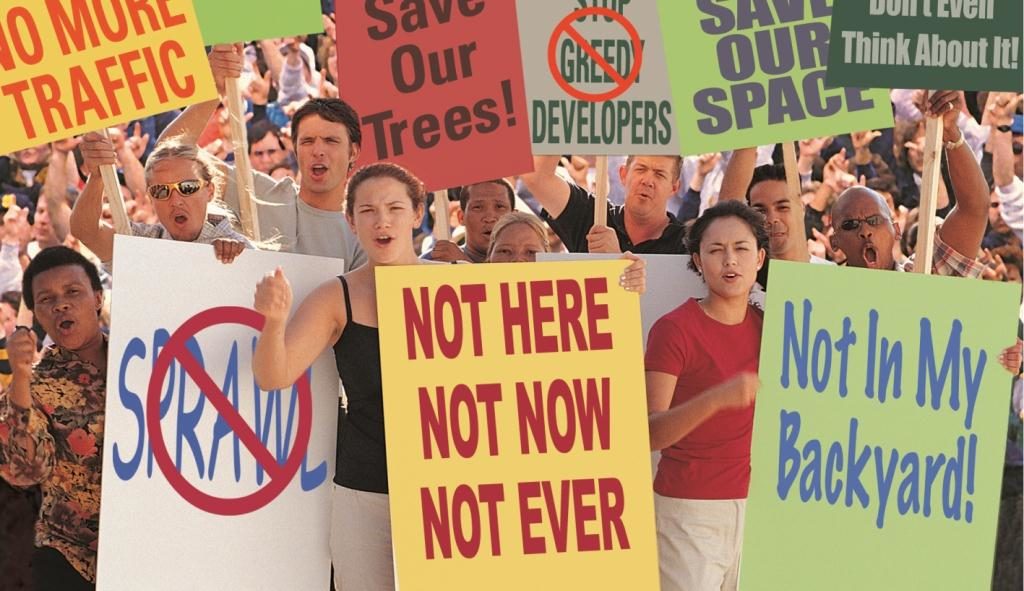 How Opponents Hijacked the Planning Process

Former U.S. Speaker of the House Tip O’Neill famously said that “All politics is local.” It can also be said that “All land use is political.” And the politics of land use has turned against development. Rather than generating a healthy debate on the merits of a proposal and weeding out projects lacking merit, good projects now die every day in a political landscape dominated by opponents to everything.

A process built upon good intentions has been undermined by advancing technology, public attitudes, and changing political dynamics. The planning process no longer encourages the kind of development and community investment that once served as an enviable engine for growth.

Vital projects, such as gas pipelines, electrical transmission lines, and power plants—as well as retail and housing projects—that mean construction jobs, permanent jobs, tax base growth, and community reinvestment are victims of a process that places the desires of the few over the needs of the many. Vocal minorities have hijacked the system and rendered impossible a reasonable and rational debate on development. The resulting impact of the current system on U.S. infrastructure, jobs, and the vibrancy of American communities is virtually incalculable.

The politics of development have changed dramatically over the past 30 years. Politicians once fought for new jobs, a growing tax base, and private investment in their communities—that was the yardstick upon which they were judged when seeking reelection. Those days are gone.

Politicians today have come to understand that the path to power lies not, as it once did, in growth and development but in obstruction.

Constituents are not rising up to demand development, but they are filling public hearings to stop it. A 2011 national survey found that 78 percent of Americans want nothing new built in their communities (http://saintindex.info/general-attitudes#nimbyattitudes). They are not against new development—just any new development near them, and they are organizing to stop it.

Elected and appointed leaders act and react differently in front of a room full of angry constituents. Board members who may see the community benefits of a project are unlikely to commit political suicide to support it when confronted with passionate local opposition. Municipal leaders understand that passionately motivated opponents, who fill hearing rooms, write letters, and circulate petitions to stop new development, are a newly empowered breed of local activists. Not only will these angry constituents remember the politicians who stood against them on Election Day, organized citizen activists often use their new grassroots movements to mount a direct challenge by running for office themselves.

The key fact is this: Supporters of development do not participate in the political process, while today’s activist opponents show up and dominate the process.

This is common knowledge to anyone involved in development, not only in the United States but in virtually any democratic nation where citizens have a say in what gets built.

Grassroots movements do not organically spring up to support a project, but opposition groups driven by fear, self-interest and cynicism can take off like wildfire. The proliferation of digital tools like Facebook and Twitter give average people the ability to find like-minded project opponents and to build effective grassroots opposition movements. While project supporters certainly have access to these same tools, they are far less motivated to use them. The process is overwhelmingly dominated by opponents.

Imagine a grocery store is proposed in your community that will redevelop a vacant retail site. The developer is well known and respected and promises major site improvements and community amenities.

On a Tuesday night, a public hearing is held at Town Hall by the Planning Board or the City Council to get public input prior to voting on the developer’s application. Who shows up and makes their voices heard? Not the supporters. While the vast majority of residents may fully support the project and welcome it to their community, the hearing is packed with those who vigorously oppose it.

In some communities, a few letters to a town board member, a couple of phone calls, or a handful of people at a hearing is a groundswell with the potential to significantly impact the process. In the end, deciding what gets built is a political process dominated by opponents.

When supporters are not motivated to attend public hearings or to speak up, their position will remain unrepresented. Increasingly, developers find themselves having to drum up supporters to provide a counter balance and political cover for officials who want to support the project but cannot take the heat from opponents. These efforts to provide “political cover” rely on getting unmotivated project supporters to show their support in some demonstrable way to counter the room full of angry abutters.

Even union leaders, who used to be able to demonstrate support for projects, motivated by a desire for good union jobs, lack the political clout they once enjoyed. They can no longer be counted on to drive their members to turn out for a public hearing or even to get their members to vote for union endorsed candidates.

Now imagine the daunting path for approval of a pipeline, electrical transmission line, or other linear land use project that runs through multiple states and hundreds of communities.

All development is not good. There are bad projects, ill-conceived designs, and shoddy, fly-by-night developers. Public input and vigorous debate are essential to ensuring that communities are developed in a way that makes sense. Public participation is needed to expose short-sighted development and build on a shared community vision. But that is not what our planning systems do any more.

The opponent-dominated development approval process will continue to inhibit U.S. growth until we take action to ensure that smart development choices are not drowned out by fear and narrow self-interest.

The process must adapt to new technology, new political realities, and a new public mindset. As we rush to placate the screaming few, we are stalling the very engine that has been at the heart of American economic development.

The process must adapt to the new technological and political realities if we are to bring objective decision making back to planning. Decision making bodies need to reach out beyond Not In My Back Yard (NIMBY) activists and actively encourage input from the broader community. Some of the same social networking tools utilized to build opposition movements could be used to generate community-wide conversations on project benefits and community needs. Low cost electronic survey techniques can collect feedback from the entire community and not just those sufficiently motivated by fear and self-interest to sit through a municipal hearing. Techniques like Telephone Town Halls encourage participation from the entire community, where they can ask questions, express concerns, and offer officials real insights into community sentiment. Unfortunately, relying on social media tools like Facebook and Twitter for broad discussions about community needs and priorities could give officials an insight into community consensus. However, once the discussion turns to a specific project site, the discourse will be dominated once again by opponents to that particular site.

Increased reliance on long-term community planning and visioning puts a focus on community needs and encourages a rational conversation. If better utilized in the permitting process, this shared community vision could help counter-balance NIMBY passion and help local officials see beyond the angry constituent faces confronting them at every hearing.

John F. Kennedy’s quote, “One man can make a difference and every man should try,” has never been truer, but it’s a lopsided fight. It will take a proactive, ongoing outreach effort to level the playing field and ensure that all voices are being heard.